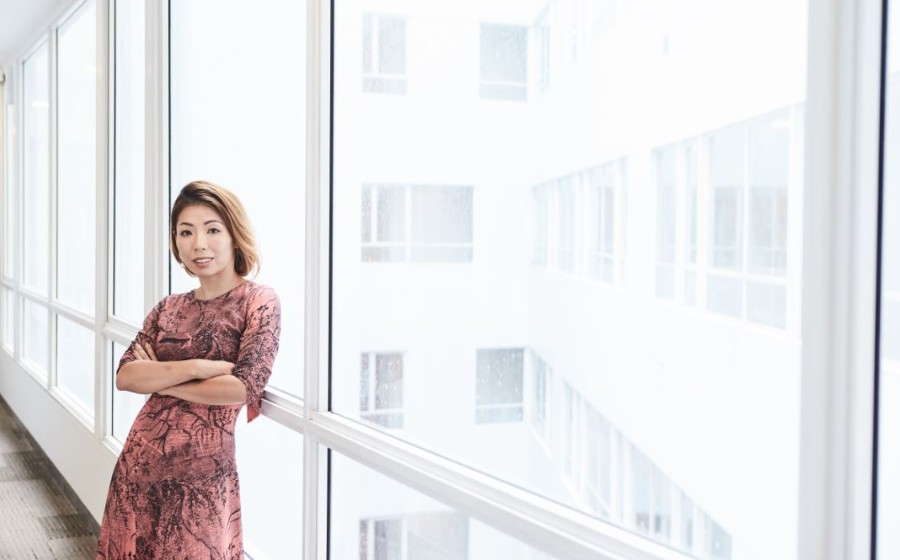 At six years old, when other children were perfecting their ABCs, Wendy Chen was learning about data structures from her father. He wasn’t intentionally grooming her into a tech wunderkind. Rather, it was his creative solution to help her learn English. (The family had just uprooted from China to Canada.)

“He used to write computer programs to teach me things. So my relationship with computer programming and artificial intelligence has always been very personal,” shares 33-year-old Wendy. “My dad (who has a PhD in computer science) always talked about coding in terms of algorithms and the design of the systems rather than as a language itself. That’s something I now take for granted.”

The exposure paid off in spades. Wendy eventually took what she learnt at home, and later at university, to work on Wall Street as a quant trader dealing with complex algorithms and trading strategies (just like in the Billions TV series.)

In 2013, she set up Omnistream, a retail data analytics start-up that raised a seven-figure US dollar amount in seed money, co-led by C31 Ventures, the venture capital arm of Capitaland.

In 2018, she moved her company’s headquarters from Hong Kong to Singapore, a strategic move into Southeast Asia.

“We help emerging market retailers turn data into profits by automating operational assortment and marketing decisions. (That means automating details like where items should be positioned on shelves, for instance.) Other markets would have given us higher revenue, but we see South-east Asia as deeply important for our long-term strategy,” she says.

“This was never an easy decision. When we went out to raise money, venture capitalists would ask us ‘why not target Western countries with higher revenue?’. It took effort to find the right investors and board who would support our long-term vision,” she adds.

Angled as an “outcome-as-a-service” company, Omnistream works with brands like 7-Eleven, Watsons and Osim across Southeast Asia and offers its software at no upfront cost. Instead, it takes a share of the profits and thus is incentivised to derive a successful outcome. To ensure this, Omnistream crunches retail data into simple actionable insights presented in a digestible Excel spreadsheet of things to do (for example, where to stock certain types of merchandise in different stores with different needs).

The software also generates a customised assortment of products every fortnight, thus saving large amounts of man-hours that would otherwise be spent on strategising visual merchandising displays. In the process, it learns more about the evolving tastes of customers across Asia.

Wendy, who wrote the first version of Omnistream’s code and still signs off on its fundamental maths, isn’t just the face of the company – she travels extensively to be on the ground with clients. Even as we speak, she’s preparing for a trip to Manila to help run a simulated 7-Eleven store to better understand its hyper-localised needs. From the get-go, she’s been crystal clear about her focus on emerging markets.

With a bachelor’s degree in applied science and systems design engineering, interpreting data to design an optimal solution is part of Wendy’s DNA. In her downtime, multiplayer board games like Settlers of Catan and Civilization help her unwind but are also an extension of her work.

Her time as a trader also honed her skill for interpreting data – which she considers one of her stronger attributes – and taught her core business and leadership fundamentals. “One thing I learnt from my time at Jane Street Capital was intellectual humility and honesty.”

Instead of pumping up what you can do, data speaks for itself, says Wendy.

“It was something my old boss taught me. Things aren’t the way they are just because we say so. The market doesn’t care how you feel. All those lessons were very hard-learnt. I’m eternally grateful that I learnt on somebody else’s dollar.”

Her working style also involves keeping her ego and emotions in check, and accepting that disagreeableness is an asset.

“Women are often groomed from a young age to be agreeable or likeable. I don’t think men are raised with the same expectations, and this helps them in the business world,” Wendy says. “Disagreeableness is often frowned upon in a young woman, but how on earth will you make the hard decisions in business if you aren’t willing to do the hard things? One of my favourite career moments from my time on the trading floor was facing an opponent who called me the B-word, and telling him: ‘I don’t understand why your opinion is relevant.’”

This dog lover has two fur kids, and is also a pilot (though her license has lapsed). She’s into aerial acrobatics too, enjoys glamping, and is passionate about water sports. She’s proactive about creating a life that fulfils her, and is candid about her coping strategy: hitting the gym to clear her head before taking action.

“In my work life, things are volatile, so my personal life needs to be simple. I have no time for drama,” Wendy says. “Your rock can’t just be your boyfriend, it has to be yourself. I try every day to think about self-improvement and how to understand the world a little more.”

Wendy is upfront about gender stereotypes and the challenges of being a leader. “A personal struggle I always face is that people expect women leaders to be more personable and empathetic. While those are positive characteristics, the business must move forward despite what I feel about an individual or a situation,” she says.

“One hard truth about start-ups is that everyone must grow at an exponential pace. This often means having to say goodbye to people who supported you early on. Personal feelings are often irrelevant to long-term success, so learning to put long-term interests above short-term pain has been a personal challenge for me to overcome.”

ORIGINALLY PUBLISHED ON HER WORLD

Forbes | Five Ways To Convince Your Customers To Try Something New